[blockquote3]Ogden, Utah is not the typical mountain town, which is exactly why it might be the next best adventure hub.[/blockquote3]

“I get a little bit of attitude from my ski town friends,” says Nicole Pelletier, a 45-year-old ski coach based in Ogden, Utah. “There’s always that, ‘you’re living where?’ I always say it’s the smelling-dog-poo-on-your-upper-lip face.”

Pelletier is a product of Western mountain town culture. Born and raised in Aspen in the 1970s, she spent her adult years bouncing around elite resort towns of the Intermountain West, always struggling to make ends meet in places where the housing costs out-paced wages. Three years ago, when she finally felt secure enough to plant roots, she did so in Ogden. It wasn’t the Alpine idyll she had been chasing for two and a half decades, but it offered the trifecta of attributes people often say they look for in a western mountain community: accessibility, diversity, and affordability.

Snowbasin and Powder Mountain are both within 30 minutes, and the top of Snowbasin looks directly down into Ogden. There are rivers, canyons, biking and hiking trails, and countless acres of public land within or adjacent to the city limits. It offers a diverse economy featuring military, manufacturing, higher education, and outdoor recreation. The demographic is both racially and socio-economically mixed. Most of all, though, it’s affordable. Even as housing values surge across the Wasatch front, Ogden’s median home price is still only about $180,000. And yet it’s treated as a pariah by many from more exclusive locales.

The common refrain is that regular people are being priced out of adventure towns. While it’s true that the billionaires are driving the millionaires out of places like Jackson Hole, Aspen, and Sun Valley—all places Pelletier has called home—the existence of Ogden highlights that there are options for people who want an affordable living situation and access to mountain recreation. Or, to put it bluntly, it’s not necessarily the skiing and the outdoors that we are being priced out of, but rather elitist towns featuring the same economic barriers that have long kept coastal communities such as Laguna Beach, California or Greenwich, Connecticut unobtainable.

Historically, Ogden was a bastion of wealth in its own right, with more millionaires per capita than any other city in the country in the early 1900s. At the time, then called Junction City, it was a railroad hub that linked America’s heartland with the rest of the world. But then came the interstate highway system, the diesel locomotive, the airline industry—all of which changed how we ship our goods and move about the country. Eventually even the tracks were rerouted through Salt Lake City, and Ogden’s relevance evaporated.

The city floundered through the 70s, 80s, and 90s. But then, following the success of the 2002 Olympics (Ogden hosted the curling events, and the skiing downhill and super-G were at Snowbasin), community leaders realized the area had something unique to offer: access to the outdoors. Rather than build another mall or convention center, they decided to attach their future to outdoor recreation. “We needed to capitalize on things that nobody could duplicate,” says current mayor Mike Caldwell who worked for the Salt Lake Organizing Committee in 2002. “It’s these natural assets.”

In the 16 years since the 2002 games, Ogden has added approximately 18,000 jobs, according to Caldwell. Though he estimates that only 10% of those come directly from outdoor recreation, he says that Ogden’s reputation as an outdoor hub has given the city a new identity and helped attract other companies to the city. “It’s not about wages. It’s about lifestyle now, and affordability,” Caldwell says. “We can provide that in ways that other communities [can’t]. The outdoor industry has really validated that selling point”

Many of Ogden’s long-blighted neighborhoods are now seeing a renaissance. Neighborhoods that were 70-percent rentals for decades are becoming more owner-occupied. “Having a constant turn over in rentals destabilizes neighborhoods,” says Caldwell. “We’ve had a lot of people come in, buy some of these old, little urban homes, put sweat equity into them, and drop roots. It’s really stabilized a lot of our neighborhoods.”

Neighborhoods like Pelletier’s. In the three years she has lived there, she has seen the area evolve. “I’m seeing a lot more young families move in that are homeowners,” she says. “There’s that pride of ownership, and it’s showing in the way the neighborhood is tightening up.”

Pelletier has lived the mountain-town housing crunch. She was the youngest of five kids raised in Aspen in the 70s, all of whom were ski racers. Her father worked on ski patrol and built houses, and the family ran a restaurant at the base of Tiehack lift. They were able to afford a house down valley in Emma, and in the winter would live in an apartment below the restaurant to be close to the slopes. “It was like living on a ship,” Pelletier says. “There were five of us kids. We had a hallway that my dad built out with six bunk beds. Our only private space was a bunk bed in a hallway with this long pipe that was all our hanging stuff. You had, like, your five feet and you had your one drawer. The trade-off was we could step out the door and go ski.”

When she was in her teens, her family moved to Hood River, Oregon—just in time to see that town boom. Over the next 25 years, she bounced from one high-rent adventure hub to another. When she finally saved enough to consider buying a place, Pelletier wanted to go back to Sun Valley, but the best she could do was a studio apart or small condo.

Instead, she compromised and landed in Ogden. “It hasn’t been easy,” she admits. “On one end, it definitely took a financial monkey off my back. The livability of Ogden is awesome. What I feel I’ve given up, is that I don’t feel like I have a really concentrated sense of tribe here.”

Pelletier likens her neighborhood to some of the grittier sections of Bend before that town boomed. “I’ve talked to people that were in Bend in the early years,” she says. “And it used to be like that in parts of Bend, where it was really sketchy. Now that place is untouchable.” A house on her street that she looked at for $65,000 just three years ago Pelletier says recently sold for $175,000. “From what I’ve witnessed in that short period of time, I think it’s only going to get better,” she says.

Which begs the question: is Ogden merely on track to be the next place regular people get priced out of? Neither Pelletier or Mayor Caldwell see that as a risk.

“One of the things we’ve focused on that targets directly affordable housing options, is we’ve put a lot more density in our downtown,” Caldwell says. “We’ve had almost 1200 units that either have been constructed or are in the process of construction just in that downtown core.”

Due to geography, population, and relative proximity to the state capital, Ogden often draws comparisons to Boulder, Colorado, where housing is 400-percent more expensive. Caldwell, however, likens it more to Pittsburgh, a place built on a hardcore blue collar economy that went belly-up when its anchor industry left. Because Ogden’s housing infrastructure is still in place from its boom era, the city has been able to grow in a way that’s less exclusive than similarly sized mountain communities.

“Our housing stock was really built out in the 1930s,” says Caldwell. “Those older homes sometimes just don’t appeal to that real higher profile buyer. A lot of those older places, a lot of the spaces we’re creating right now, really appeal to artistically minded people. That’s the market I think we’ve seen the most growth in, the art and culture groups. Not necessarily the second home owners who are just looking to put an exclusive title on their business card or mailing address.”

As someone who’s seen hometown after hometown blow up, that’s fine with Pelletier. “It’s like a secret surf spot,” she says. “You don’t want to over share, but at the same time you’re, like, proud.” 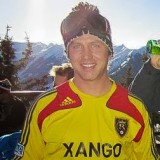 Derek Taylor spent 10 years on the editorial staff of Powder Magazine, including five as Editor. A graduate of Western State Colorado University, he left Powder in 2012 to move back to the mountains. He did a brief stint at managing editor for AdventureJournal.com and contributed frequently to ESPN the Magazine and ESPN.com, covering mostly skiing and adventure sports. Currently, he produces freelance writing and photography for numerous outlets, including Powder and Freeskier Magazines, though his primary responsibility is as a husband, and stay-at-home dad to two young boys. He resides in Huntsville, Utah.

The home vs income crunch, I do not like the term housing and wonder why we choose “2nd home” for the unoccupied, millionaire/billionaire money laundering block holes and call the places that people actually live in and call home, “housing.” Screw that and the and the nowhere to be seen rich that have made our neighborhoods unaffordable. It is time to really go after the off-shored/laundered money that escapes taxes and drives the majority into trying to find “affordable housing.”