[blockquote3]Still grappling with the bad planning decisions of the past, Tahoe looks to incentivize redevelopment.[/blockquote3]

There are few places that highlight the long-term impact of bad development decisions like the Lake Tahoe basin. It started, as so many poor planning choices do, with the Olympics.

Squaw Valley hosted the Winter Olympics in 1960 and that year, for the first time, the International  Olympic Committee sold broadcast rights to the Games.  CBS broadcast hours and hours of coverage that shone a spotlight on the beauty of Lake Tahoe. Shortly after the Games, development boomed in the basin. At one point there was a plan on the books to grow the regional population from 25,000 to 250,000, put a four-lane highway over the lake and a bridge over Emerald Bay.

Although that project never made it off the ground, plenty of others did, including the Tahoe Keys, a private marina community of more than 1500 homes, most with their own boat docks.  Built on wetlands critical to the health of Lake Tahoe, it is ground zero for nearly every invasive species in the lake, from Eurasian millefoil to abandoned goldfish.

But Tahoe had long been a focus for conservationists–John Muir formed the Sierra Club after a vacation to Lake Tahoe in 1888 during which he saw the damage of industrial logging and fishing–and the area was still home to at least as many environmentalists as developers.  Activists reacted quickly to curb irresponsible development after the Olympics. Colonel Max Fleischmann, heir to the massive Fleischmann’s Yeast fortune, worked closely with his friend Lester Summerfield (a Reno attorney widely known as Nevada’s “Mr. Republican”) to bring both California and Nevada to the table in order to reign in the chaotic growth that posed a threat to the Lake. Around the same time, League to Save Lake Tahoe (the folks responsible for all those Keep Tahoe Blue stickers) formed and mobilized against the freeway development project mentioned above, which was also set to include  additional casino districts and heavily populated urban centers around the lake. Both groups also worked to stop the dumping of sewage in Lake Tahoe; at the time (in 1961), the Nevada Department of Health was forecasting an “average of 30 million gallons of sewage per day and at times 50 million” spilling into the Lake.

In 1969 California governor Ronald Reagan and Nevada governor Pat Laxalt drafted a bi-state, bi-partisan compact, ratified by Congress, to govern the Lake Tahoe. The compact triggered the creation of the Tahoe Regional Planning Association (TRPA), a bi-state agency with the authority to approve transit and development plans in both California and Nevada on both sides of the lake. The TRPA put a building moratorium in place for environmentally sensitive lands, pulling the rug out from under landowners who had bought their dream plot in Tahoe only to find that they could no longer build on it.  When the California Tahoe Conservancy formed in 1985 it spent its first several years buying up those parcels.

With the prevailing mindset of curbing growth, TRPA put forth its first Regional Plan in 1987 and unveiled a complex system of development rights (often referred to as commodities) used to govern development decisions in the lake.

First, the organization created a “land capability” rating system, which rated how much development could reasonably cover any particular plot of land depending on soil type, and proximity to streams and wetland.  It then created commodity units for each type of development—residential, tourist, and commercial—determined the number of units the basin could handle (including existing development), and capped the number of commodities across the board. The system worked.

TRPA was able to dramatically curb growth and irresponsible development. Planners from all over the world began to visit Tahoe to study how it was able to arrest the decline of clarity in the lake and impose a responsible growth strategy on the basin. They still do.

“We have a map in our office with pins in the countries we’ve had visitors from, and it’s really a lot of people from all over the world,” Lotshaw says.

By 1997, Tahoe had attracted federal attention and President Bill Clinton visited the lake for the first Lake Tahoe Summit. The Tahoe Restoration Act, a federal bill providing funding for restoration at Tahoe, was passed shortly after that summit and over the next two decades the decline in clarity at Lake Tahoe (a key indicator of pollution) was stalled and reversed.

But that wasn’t the end of the story. The same system that masterfully halted destruction of the lake back in the 1980s has now unintentionally impeded progress. Because of the complexity and cost of redevelopment in Tahoe, those old blighted 1960s developments are still hanging around, polluting the lake. And new, sustainable developments are hard to push through. “It’s too hard, too expensive, too difficult,” says Meea Kang, of Domus Development, the only developer to build new affordable housing in Tahoe in decades. “We had to have twelve different entitlement processes and then we had to go jump through everyone’s hoops.”

Plus, the context of development rights has changed—while residential and tourist accommodation units were once very obviously different things, those two types of development have converged thanks to services like VRBO and Air BnB. Recent studies around the basin have found that more than half the homes in South Lake are now being used as vacation rentals, while 65% of homes in the north and west shore are second homes or vacation rentals.

“Tahoe rules require that every hotel room has a tourist accommodation unit, which is a commodity that costs thousands of dollars,” explains Jesse Patterson, deputy director of the League to Save Lake Tahoe. “Rather than do that, why don’t I just buy a house and turn 6 bedrooms into a vacation rental? Then I don’t have to follow any of those rules.”

Environmental impact reports haven’t been updated to reflect this new context either. “With most second-home developments, they assume only about a 20 percent occupancy most of the time,” says Alexis Ollar, executive director of Mountain Area Preservation, a local environmental nonprofit. “But thanks to AirBnB and VRBO, it’s more like 80 percent occupancy most of the time–we’re not accounting for the impact of those occupancy levels.”

The combination of costly, expensive development and the rise of technology-enabled vacation rentals has also contributed to a housing crisis in Tahoe. “We have plenty of buildings in Tahoe, they’re just not being used for the right things,” Patterson says. “You’ve got residents living in motel rooms that were never meant to be permanent residences, and tourists renting houses.”

To address these issues, the TRPA brought together a development rights working group that met throughout 2016 and has continued to meet this year, with a final proposal for an updated system due at the end of the year. Updates aim to make the development rights system less complicated to navigate, and to provide commodity swaps and “bonus unit” incentives to encourage the consolidation of development in a few key hubs around the lake, restoration of environmentally sensitive land, and sustainable redevelopment of run-down buildings. The idea is that a property owner could tear down their rundown 20-unit motel that’s sitting atop environmentally sensitive Tahoe land, sell that land to either the local jurisdiction or municipality or a nonprofit land trust like the California Tahoe Conservancy, and earn up to three times as many Tourist Accommodation Units (TAUs, the commodity assigned to hotel rooms in the basin) for a development in one of a handful of designated town centers around the lake. “The idea is to turn the land-use regulations on their head, and use them to incentivize getting rid of the old stuff and building new, more sustainable stuff,” says Patrick Wright, executive director of the Conservancy.

“The development rights initiative is really focused on taking what is a very complex, difficult to understand system that a lot of folks have never encountered anywhere else in the country – a system that adds complexity and cost to projects – and trying to streamline the system, make it easier to navigate, and to facilitate environmental redevelopment at the end of the day,” Lotshaw says.

Still up for debate in the working group? Where the AirBnB-type rentals sit, what to do about them, and whether it’s the job of TRPA or local jurisdictions to figure it out. It might seem like an irrelevant issue, but Patterson (who sits on the working group) says it’s not.

“There’s so many motel rooms and then permitted vacation rentals, and then all the AirBnBs, we’ll never get to a point where a hotel could pay an employee enough to live here,” Patterson continues. “When workers are living outside the basin and commuting, that’s more vehicles on the road and more emissions contributing to loss of clarity in the lake. It’s all tied together.”

The final proposal from the TRPA Development Rights working group is due at the end of this year, and TRPA hopes to present an alternative development rights system to its board for approval in 2018.

But even as this new plan moves forward, a new set of environmental challenges is emerging for the Tahoe basin as climate change makes past efforts slightly less effective. The lake is warming faster than scientists estimated it would. Summers are longer and since 1968, the amount of time when the lake exhibits summer-like conditions has increased by almost 26 days. The date of first spring snowmelt — March 29 in 2016 — has also moved up by 19 days since 1961. That means that it’s getting harder to curb the spread of invasive species, and that maintaining the lake’s trademark clarity is becoming more challenging as warmer waters lead to an increase in algal blooms. The lake’s health is generally measured by its clarity, which had been declining rapidly before the first Lake Tahoe Summit attracted federal attention and funding (in the form of the Tahoe Restoration Act) in 1997. In the 20 years since,  efforts to curb stormwater runoff and erosion, and restore previously degraded wetlands, arrested the decline in clarity and even repaired it a bit. Now climate change is telling conservationists they need to work even harder. The most recent “State of the Lake” report found a nearly 17-foot drop in clarity for 2016. The first test of lake clarity, conducted in 1968, found visibility down to 102 feet. Recently, the yearly average was at 69 feet and holding. For 2016 it dropped to just 56 feet, a dramatic difference from the year before.  “With our longer summers now, the lake starts to warm much earlier,” said Geoffrey Schladow, director of the University of California at Davis Tahoe Environmental Research Center, which puts out the annual report. “And when it warms, that light water floating at the top helps trap light algae there.”

All of which means that the successful conservation work that’s taken place around Tahoe over the past several decades, from stormwater projects to wetlands restoration, not only needs to continue, but also must be augmented by projects that curb auto emissions and erosion, and be prepared to nimbly adapt as the situation evolves in the future. 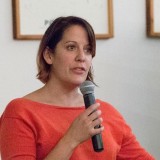 Amy Westervelt is an award-winning writer and editor covering the environment, psychology & health, technology, and business for a variety of national publications. She also reports for various NPR member stations and shows, and host two podcasts: Range podcast and Tell Me About Your Mother. IN 2017 I am working on a book called Rise of the Matriarchy, which looks at our cultural notions of motherhood, how they impact all women, whether or not they decide to have kids, and what we can do to improve matters.